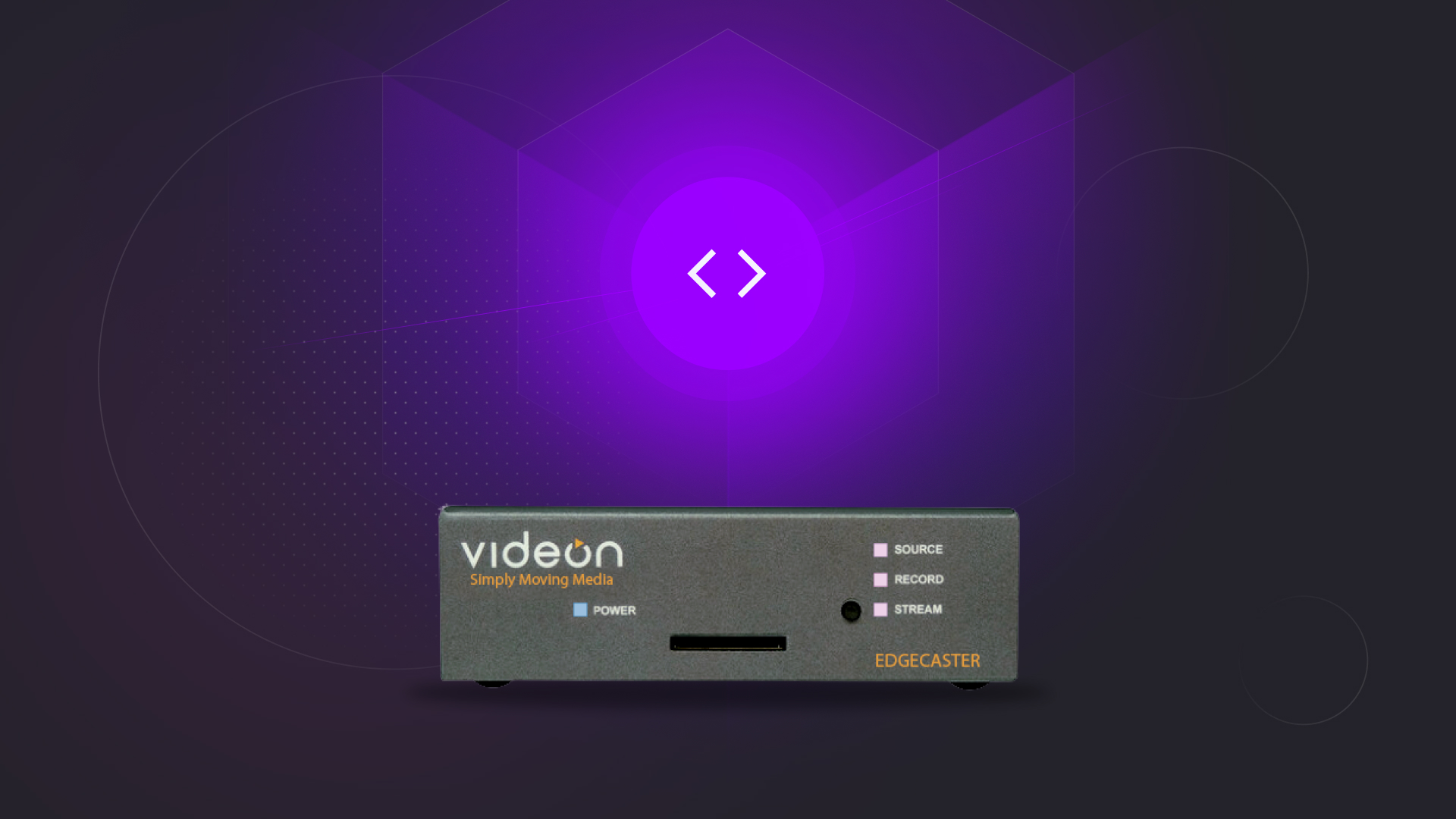 By Todd Erdley | Founder and President at Videon

Very few innovations are a revolution by design–it’s an evolution. At Videon, we pride ourselves on listening to our customers and industry. During our 20+ years in the industry, Videon has been at the center of the digital video evolution.  We've discovered that when we listen, we find ways to anticipate outcomes, develop new technology, and empower our partners to evolve using solutions they never had before.

How do we back up a claim like that? First, let’s run through the evolution of EdgeCaster.

When we developed EdgeCaster, customers quickly told us that they wanted the ability to control the platform and create deeper integration to their workflows. In response, we gave access to REST API so that programmers could locally tell the platform what to do.

Then we were asked if REST API could be accessed through the cloud via XML. The ability to write routines from the cloud to the platform significantly enhanced the capabilities of developers to in effect, fully take control of the on-premise platform from the cloud.

Then, a major original equipment manufacturer (OEM) came along, saw the computing power of the device, and asked if we could enable a Python environment to support their scripting ideas. Though this was difficult and took a lot of time and effort, it was a game-changer. Now the OEM could write its own routines on the device for more seamless interaction with the cloud.

We could have stopped there, but we didn’t. (The funny thing about evolution is the constant rate of change.) To stop is to cease growth, and we thrive on change.

We saw that some developers didn’t want to use Python. Maybe they used Go, or Node, or something else entirely. This could cause polarity between EdgeCaster and the creatives who used it. We needed to find a way to achieve developer world peace.

Enter containers. Containers are isolated bubbles within the machine, each capable of harboring its own configurations, software, and libraries. Containers within the device mean that, in theory, anything someone develops can be applied to EdgeCaster—without reprogramming the box—from virtually anywhere.

Through listening, learning, and innovating, we elected to “containerize” EdgeCaster. No longer is Edgecaster an encoder so typical of what the industry has been forced to use. Now, EdgeCaster is a data center—albeit a micro one—that happens to have an encoder as one of its many core functions. With Edgecaster being “containerized”, the platform allows developers to creatively solve problems for their customers. Honestly, we think that the capabilities of our platform are vast, and we anticipate developers joining us to unleash its potential.

That’s where you come in.

We have worked extensively with Rob Zazueta Technical Consulting to enhance our developer experience. Rob is a guru in all things API. He lives to make sure developers have all of the tools they need to find solutions, get the job done, and through doing this, add more value for customers. He is currently helping us to actualize a developer community. Think of it as the super cool AV club of today’s video broadcasting.

Our aim with the developer community is for the video experts, dreamers, and empowers of the field to band together within a technical toolset to see what is possible. If we can have conversations about what problems need solutions, what individual goals are, and how we can enhance offerings to develop great solutions, then we can disseminate that information throughout the rest of the industry. As Rob beautifully stated, “We need to inspire the industry. We also need to be inspired by the industry. Our developer community really allows us to do that.”

Who do we need?

We’ve put this toolset in front of a fair amount of developers and OEMs in the video space over the last two years. The ones who have the most success with the device have specific video problems they are looking to solve. They are dreamers with enough technical understanding of their particular problems to implement solutions. They experiment and thrive in environments that are new and exciting. These users want to be early to the party. They want to enable evolution and they want to transform the status quo into something one never could imagine. After all, before a smartphone existed, did anyone ever dream of Uber? With EdgeCaster and its open development environment, one of you dreamers will create a "Uber" moment. Who will it be and what will it be?