Don’t let EdgeCaster EZ fool you! It’s easy to use and has a ton of processing power under the hood, all wrapped up in a form factor that is super portable, even rack mountable by the threes...

The Videon EdgeCaster EZ is a powerful contribution edge encoding device designed for the point-of-production, delivering both low-latency and cost-efficiency, all wrapped up in a surprisingly small package that’s easy to set up and forget.
EdgeCaster EZ is a standards-based, Qualcomm SnapDragon powered, scalable UHD 4Kp30 device suitable for all types of time-sensitive professional live streaming applications. 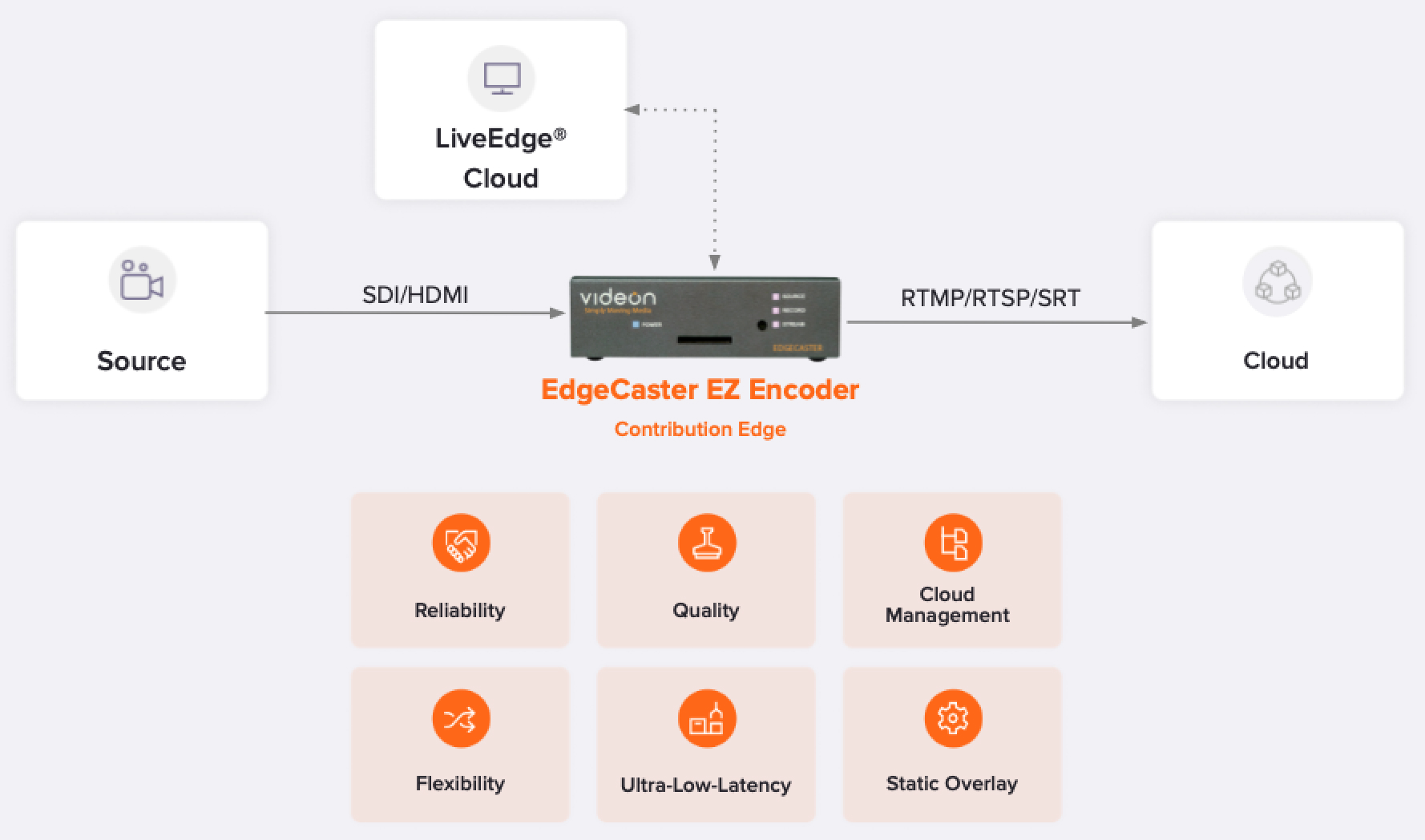 EdgeCaster EZ Encoder is available in three configurations, perfectly packaged and upgradable, to enhance a variety of live streaming workflows. Individual device management and health monitoring for a fleet of edge devices is provided by access to LiveEdge® Cloud.

Depending on configuration, EdgeCaster EZ can send a single stream, or up to three simultaneous streams to major streaming platforms and local destinations, in the cloud or through the public Internet, making it the most versatile solution for both local and broadcast video distribution. EdgeCaster EZ can provide simultaneous RTMP/RTMPS streaming to online platforms such as Facebook, YouTube, Twitch, Amazon Web Services, and others; support for RTSP, Unicast, Multicast, SRT, and HLS/DASH.

EdgeCaster EZ devices can be remotely upgraded to multiple outputs or multiple outputs plus MBR. Even more importantly, EdgeCaster EZ can be upgraded to the Videon Compute Platform (VCP) at any time by simply unlocking the device and signing up for a VCP subscription. VCP benefits include access to Videon’s evolution on-the-fly, with continuous  6-8 week release cycles, additional features such as time synchronization to facilitate productions with multiple camera sources, SCTE-35 ad marker insertion for monetization, early access beta testing, VCare+ with hardware upgrade options, and much more.

EdgeCaster EZ comes in a small chassis that is perfectly portable. That said, sometimes rack mounting is the best option for workflows with lots of live streams.
Simply add the EdgeCaster Horizontal Rack Mount Tray (19") (1RU) for direct mounting of up to 3 EdgeCaster EZ devices. This custom rack tray is optimized for heat dissipation.